Rates Up, Lump Sum Offers Down

If you’re like many workers with a pension, you may wonder whether to take a lump sum payout or the traditional monthly benefit. This is a tough decision and is made even more challenging because the lump sum amount changes from year to year. Today’s soaring interest rates means that some lump sum pension offers may drop $100,000 or more the next time the company updates their formulas.  Knowing the potential impact, you may be able to put that difference in your pocket instead of your employer’s.

Lump sum pension payments are tied to something called “Segment Rates” which are set by the IRS and updated monthly. Employers use this information, usually once a year, to determine how much to offer as a lump sum in lieu of taking a pension. There is an inverse relationship between the size of a lump sum and the Segment Rates, so as rates rise, the lump sum paid to retiring employees drops.

When interest rates are rising rapidly, like they are now, lump sum payments can drop significantly.

Here is an example of how a small change in interest rates can have a big impact.

John Dough spent the last 20 years working at an automotive company and now he is thinking about retiring. His pension would pay him $3,000 a month for the rest of his life or he could take a lump sum payout. In 2021, because Segment Rates were lower, the lump sum that was offered to him was $1,053,039.

Every August his employer recalculates its lump sum offer based on the new Segment Rates for the year. Unfortunately for John, interest rates have risen quickly in 2022, going up more than 2% in just six months. So, when the lump sum offer is updated based on the new rates, John’s lump sum is projected to shrink over 8%! That means John will receive $85,000 less if he waits to retire until 2023.

In the figure below, you can see how quickly Segment Rates have climbed from their historic lows. 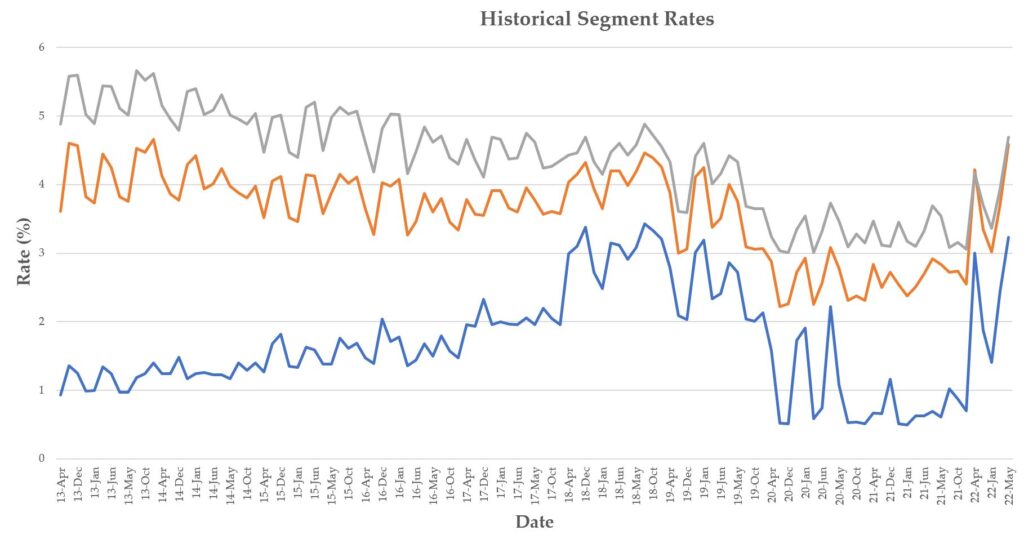 Opting for the fixed monthly pension payment can seem the safer way to go, but with inflation up over 9% in the past year, that fixed payment can buy less and less if inflation sticks around.  In addition to the pension vs. lump sum decision, there are many other factors that need to be considered before retiring.  A good retirement plan should address when to take Social Security, how to fund health care costs, tax planning opportunities, expected longevity, and much more.  Our team of fiduciary Certified Financial Planner professionals and CPAs have been giving our clients expert advice for decades.  We’re happy to run the numbers for you to help you make your best decision.  See more at our website at https://vintagefs.com/services/pension-lump-sum-analysis/.