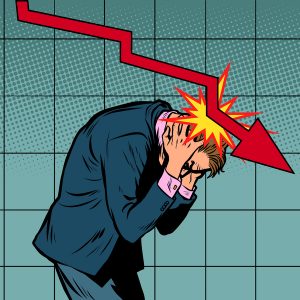 Have you ever kicked yourself for buying stock funds at the top of a market cycle? Your timing may be bad, but it couldn’t be worse than Joe’s, one of the world’s worst market timers.

Joe started working in the 1970’s but kept all his savings in a bank account that earned no interest. Joe only worked up the courage to invest in the stock market after the market performed really well. At the end of 1972, Joe put $10,000 into an S&P 500 index fund.

Years later, in the summer of 1987, after another market run-up, Joe finally felt comfortable investing his money again. By this time, Joe had another $10,000 to put into stocks. In October 1987, the stock market experienced its worst one-day drop in history, known as Black Monday, when the Dow Jones Industrials Average fell 22.6%.

Joe, again, became wary of investing more money in the stock market. But the money Joe had already invested remained in his stock fund.

A little over a decade later, when tech stocks were really booming, Joe decided to try his hand at investing again. In December of 1999, Joe invested another $10,000 of his savings. Then the tech bubble burst. Joe had invested his money right before the stock market experienced a 50% downturn.

Joe, again, kept the money in the stock fund, but all his new earnings went into his bank account.

The stock market rebounded in the mid-2000’s and Joe decided once again to try stocks. He invested another $10,000 in October 2007—this time investing right before the financial crisis, when stocks fell over 50% again.

Joe kept his money invested but decided to take a break from investing new money for a while.

In December of 2019, during the longest bull market in history, Joe decided to invest his money one last time before retiring. He put another $10,000 into the same index fund. Of course, in early 2020 the onset of the COVID-19 pandemic sent stocks down over 30%.

That was Joe’s last foray into stocks, and he kept the rest of his money in his savings account until he retired in June 2021. Despite his bad timing, Joe was able to retire with $975,000 invested in his stock fund—plus all his savings that he did not invest.

To summarize Joe’s awful timing decisions, the only five times he invested in the stock market were during market peaks, and he had huge losses in the subsequent periods. Joe never sold out of the stock fund since first investing in 1972. This allowed his investments to compound over the years, even with extreme losses, and Joe ended up turning the total $50,000 he invested over the years into almost $1 million!

Joe had a strong stomach and kept his money invested, and this is what allowed him to benefit from the stock market—even though he couldn’t have timed his investments any worse.

With stock prices at near-record highs today, it’s important to remember this lesson. The stock market has always had big drops and yet, historically, it has always moved to new highs. The way to lose isn’t by buying high.  It’s by buying high and then selling low. If you can’t stomach seeing the value of your stock funds dropping by 30% or more, it’s best to sell today, not at the inevitable next trough.