Eighth Wonder of the World

It’s graduation season and thousands of new college graduates will be starting their first “real world” jobs in the coming months.  As they prepare to begin “adulting” they’ll face all kinds of demands on their new paychecks including security deposits, new furniture, a work wardrobe and maybe even their own cell phone plan.

At the new job they’ll face all the HR paperwork on health insurance plans, tax withholding and how much to save into their 401(k) plan.  With all the demands on their funds, it’s easy to put a zero on the 401(k) contribution line, but some knowledge about what’s been called the “Eighth Wonder of the World” might change their mind.

Baron Rothschild once said, “I do not know what the seven wonders of the world are, but I do know the eighth: Compound interest.”  This eighth wonder can be a huge boon to young people that start saving early for retirement as their funds may be able to compound gains for decades.

My first job out of college was in the investment world where I got to talk to people about saving for retirement.  IRAs were the savings vehicle of choice in the early 1980’s and the annual contribution limit was $2,000.  We would show illustrations of how savings of $2,000 per year, compounded at 10%, could grow to $1 million in a little over 40 years.  While that illustration of the power of compound interest was exciting, it was another example that created the urgency for me to start saving seriously. 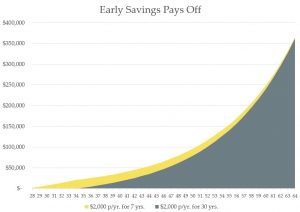 The example used two 28 year olds.  One started saving $2,000 per year until age 35 and then stopped after investing a total of $14,000.  The second person waited until age 35 to start and then saved $2,000 per year for the next 30 years.  At age 65, the early saver had a little larger balance, about $364,000, despite saving less than a quarter as much over the years!  That created the urgency I needed to get started and, once I saw how my funds were compounding, it was easy to keep growing my portfolio.

For today’s young people, it’s important to start the savings habit early.  They may qualify for an employer match on some of their 401(k) savings but, more importantly, they’ll get used to living within their means.  And that can mean a lot less stress in their lives.

The good, early savers also will find that they have more options as they get older.  One couple we’ve worked with started early, had children later, and both were able to work part-time while their children were young.

If you know a young person just starting out, pass this along to them or buy them a copy of The Millionaire Next Door for a graduation present.  Maybe someday they’ll thank you for sharing your wisdom and changing their life.