Do you remember the PIGS?  The European Debt Crisis a decade ago centered around Portugal, Italy, Greece and Spain.  Their governments and banking systems were in dire straits after excessive borrowing and they needed to be bailed out by their European neighbors, the European Central Bank and the International Monetary Fund.  The crisis dragged on for years and the countries still struggle with heavy debt burdens today.  All four have seen their real economic output (GDP) decline over the past decade, even before the impact of COVID in 2020.

The PIGS were able to borrow cheaply following the formation of the European Union due to policies of the European Central Bank and they took full advantage of it.  Similarly, in the US, Puerto Rico had special tax status that allowed US investors to earn tax free interest on their bonds.  That led to cheap financing and excessive borrowing until Puerto Rico had their own debt crisis and had to be bailed out by the federal government.

Today, the US Government has access to very cheap financing, with the ten-year US Treasury bond yielding about 1% and two-year notes at just 0.15%.  Like the European and Puerto Rican situations, the rates are not due to free markets.  In the US today, interest rates are being pushed down by the Federal Reserve which has effectively printed about $4 trillion new US dollars in 2020, increasing the M2 money supply by a whopping 25%.

The pandemic has given the US government an excuse to borrow excessively.  And 2020 was also an election year in which both parties wanted to seem supportive of the crashing economy.  With the latest $900 billion in support, the total pandemic funding comes in at well over $3 trillion, or over $10,000 for every American. 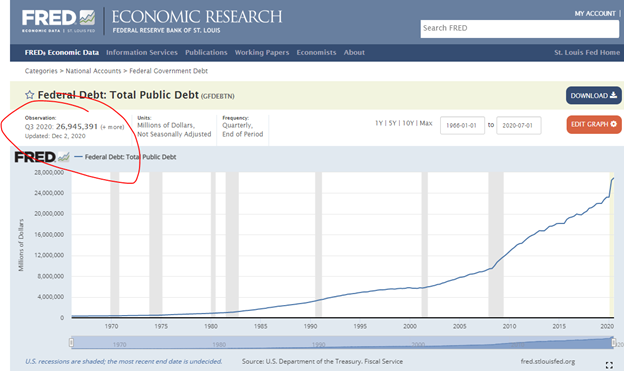 The total US government debt surpassed $27 trillion in October, up from $23.2 trillion at the end of 2019.  It is hard to grasp such a large number, but the US Debt Clock website breaks it down to over $82,000 per American citizen and over $220,000 per taxpayer.  But we’ve heard about deficits and debt for years and yet the US economy seems fine, right?

The World Bank published a study, “Finding The Tipping Point — When Sovereign Debt Turns Bad”, several years ago.  It concluded that when a country’s debt to GDP ratio exceeds 77% it begins to reduce economic growth by 0.017% for each percentage point above the 77% threshold.  This helps quantify the economic impact on the PIGS, Puerto Rico, and other countries that have borrowed beyond their means.

The graph above shows the stagnation of the PIGS’s economies.  While Greece and Italy have had debt to GDP levels above the 77% threshold for over 25 years, all four countries saw their debt levels climb sharply beginning around 2009.  Portugal topped that level in 2009 and Spain followed in 2012. 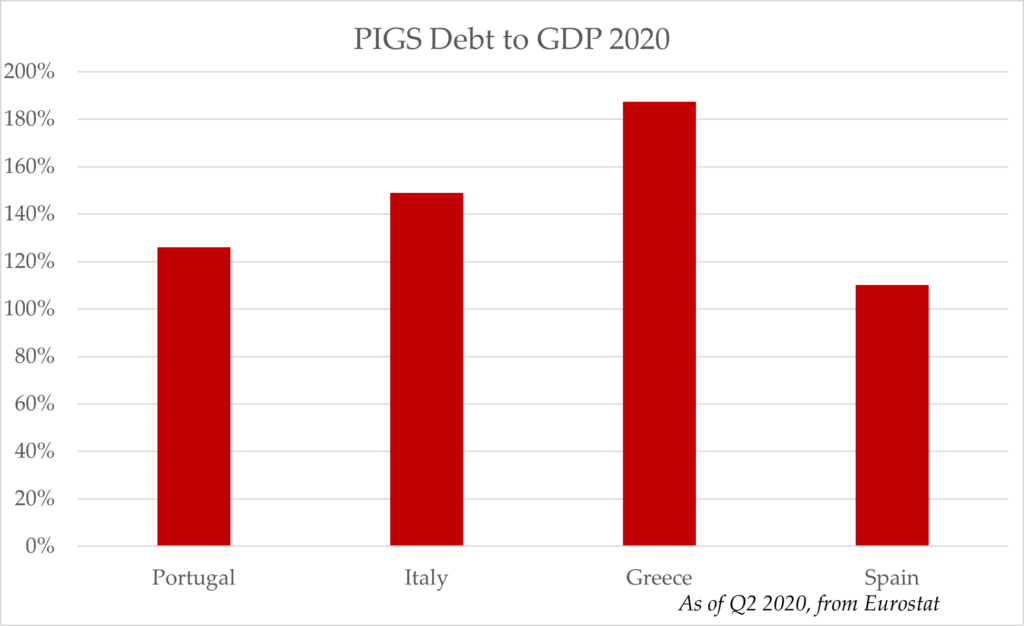 If we look around the world today, we find that some countries have exceeded the 77% threshold while others are comfortably below it. 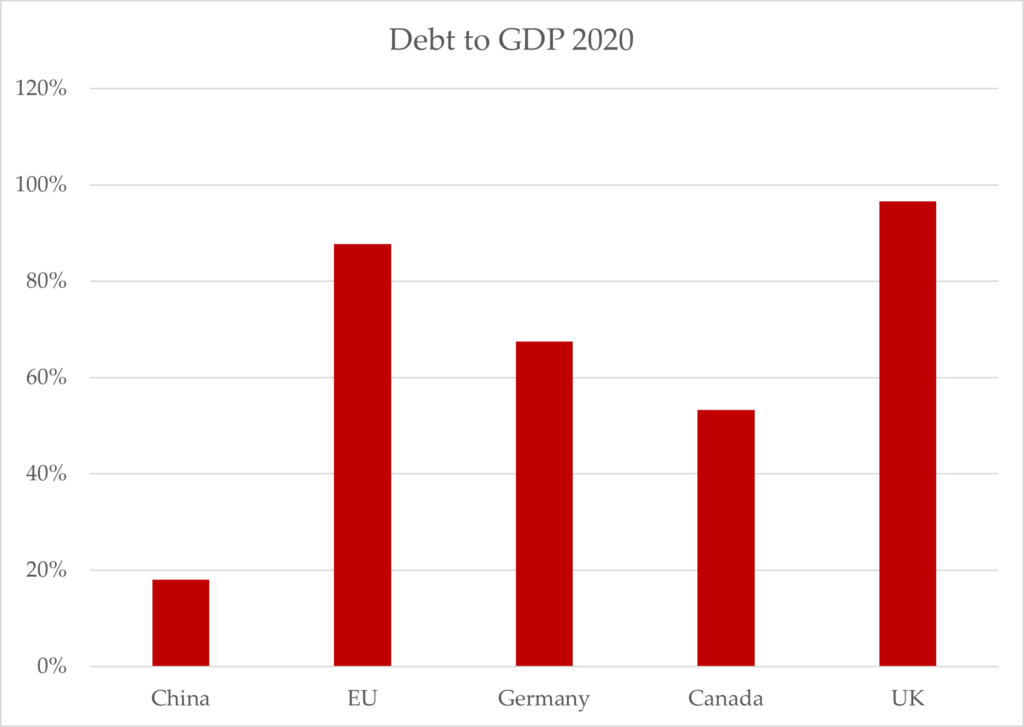 The US borrowing level, higher than most countries at the beginning of 2020, has soared with the spending out of Washington.  Today, we’re among the PIGS. 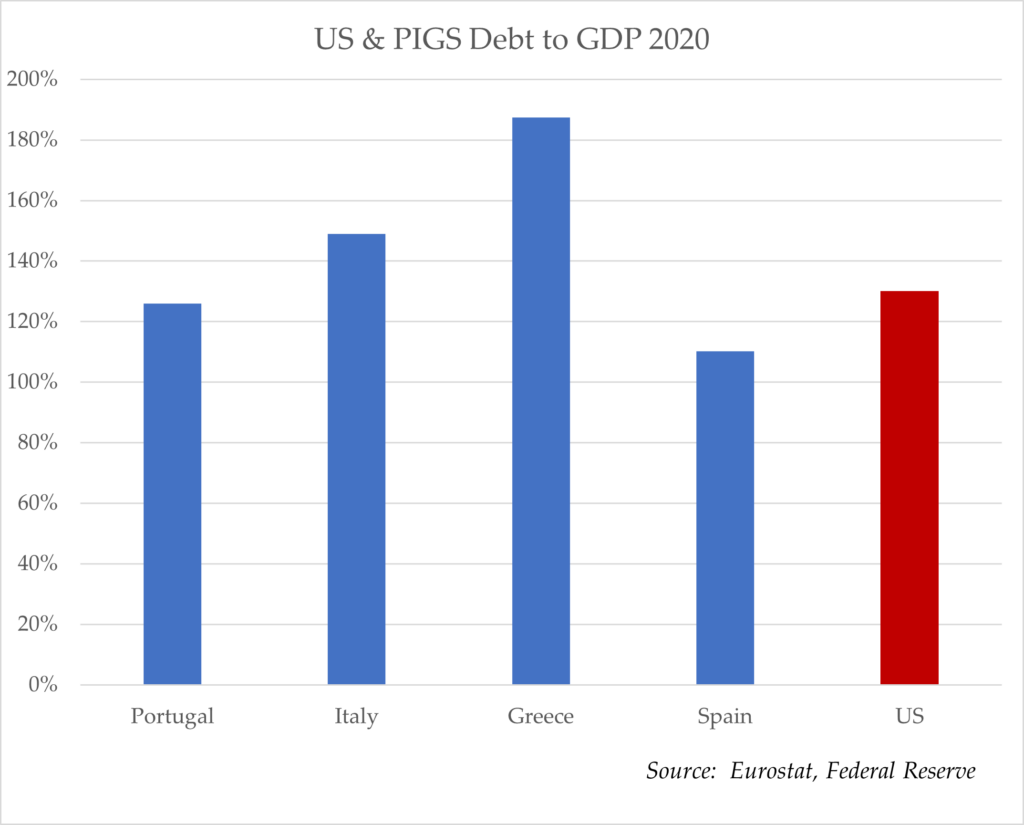 If we apply the World Bank study’s conclusions to the US economy, it helps explain the slow rebound from the 2008-09 Great Recession.  Normally, after a recession, the economy rebounds to strong growth, but the 2010’s saw growth rates well below prior recoveries.  Economic growth had averaged over 3.5% annually from the 1970’s to 2000.  The 2000’s saw a recession in 2001, 9/11, and the Great Recession, yet still managed 2%+ growth for the decade. 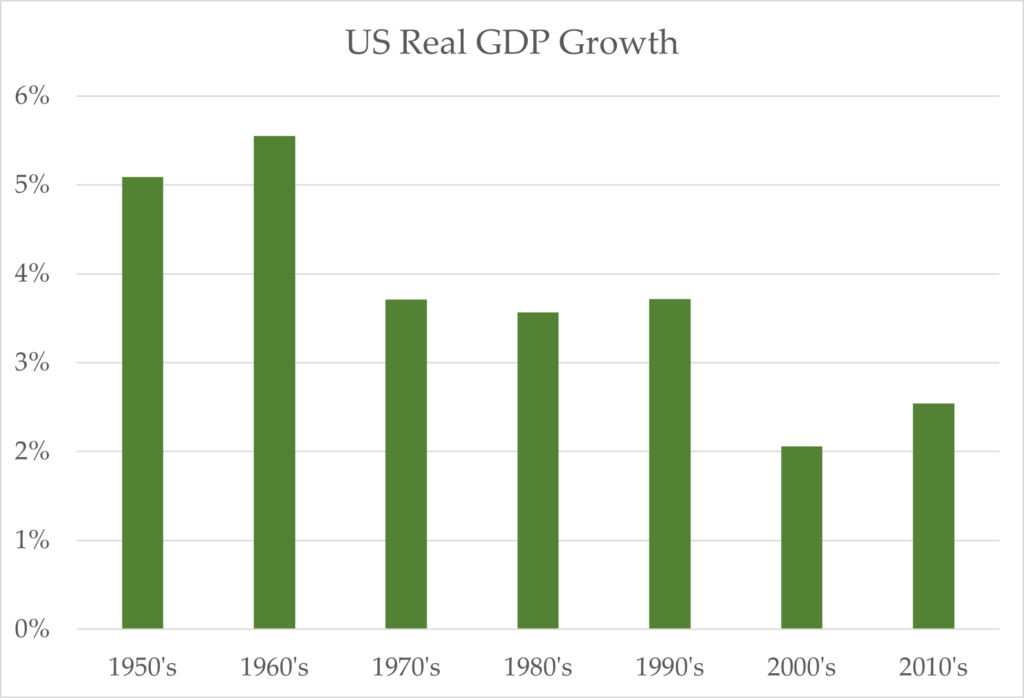 In the 2008-9 Great Recession, the US debt to GDP ratio jumped from 2007’s 62% of GDP to over 84% by the end of 2009, topping the 77% threshold for the first time since 1950 following World War II.  Using the World Bank study formula, that has likely knocked about 0.5% off annual GDP growth in recent years.  With the spike in debt in 2020, the economic drag has doubled to almost 1% and will likely rise with further huge deficits in 2021 and probably beyond. 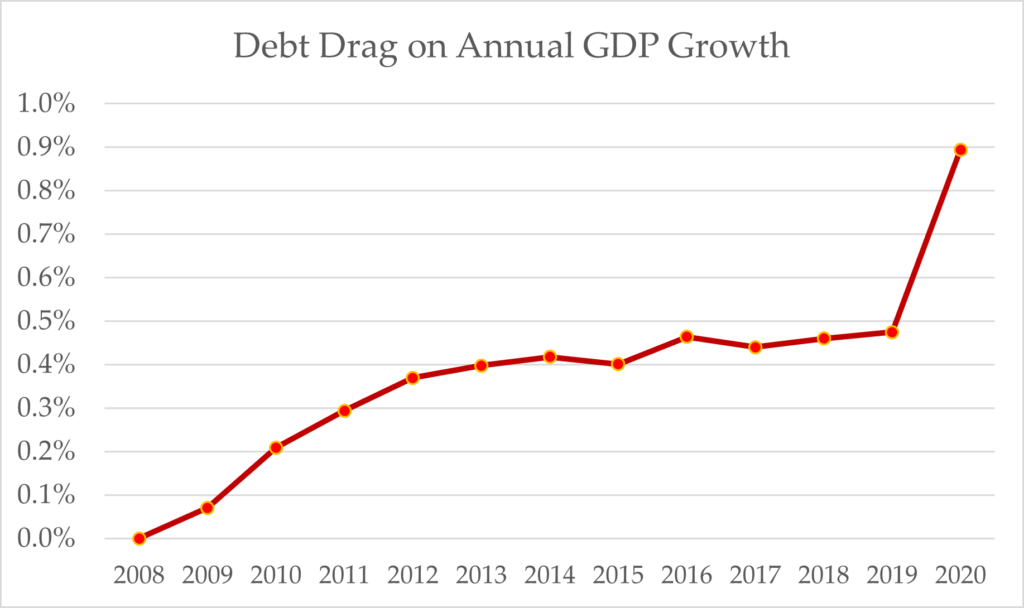 Some economists argue that the US is special and can handle the higher debt levels.  They cite Japan’s debt to GDP ratio of over 235% as proof that we’ll be fine.  But look at Japan’s economy over the past 25 years, shortly after they surpassed the 77% threshold on their way to over 200%.  Is that really okay?  And their stock market returns, including dividends, have averaged just over 3% annually over that time.

While Japan funds their debt internally, the US relies on foreigners to buy about a quarter of the debt.  With the debt levels likely rising faster than our savings, we’ll need foreigners to buy even more in the future.  That leaves us open to the free markets and what interest rates our lenders will want to charge us.  If they demand a risk premium due to our poor credit rating, our interest costs could soar, leading to draconian budget cuts and ever higher taxes.

Countries that have ended up hopelessly indebted sometimes get a bailout.  But the US is too large for any other country or organization to effectively bail out.  In order to solve our financial predicament, we’ll first need to acknowledge it.  Then we can raise taxes and cut spending to quit digging the hole any deeper.  Or we can devalue our currency, which has happened to some extent over the past few months.  This can lead to inflation that would eat into our savings.  Unfortunately, we can’t borrow our way to prosperity and the sooner we address that, the better off we’ll be.

« Itemized Deductions—Could They Help You?
Are You Prepping or Planning? »
Back to Blog